Dair Ghaelach. It means, quite simply, Irish oak. This whiskey has been matured in barrels made from virgin Irish oak grown in the Bluebell Forest on Castle Blunden Estate, Co. Kilkenny. The oak imparts this special whiskey with the true and unique flavour of Ireland.

The latest chapter of the Midleton Dair Ghaelach story takes us to Bluebell Forest, found among the historic stone walls of Castle Blunden Estate in County Kilkenny. Since the 1600s, generations of the Blunden family have watched over a stand of Irish oak trees, with a carpet of luminescent bluebells covering the forest floor. The carefully felled oak from these woods have imparted their character and nuances in a very unique and intrinsically Irish whiskey. 130 years old, the harvesting of these trees will allow the many remaining oak and newly planted saplings to grow tall and broad, encouraging regeneration and growth in the Bluebell Forest.

Once harvested, the oak logs were shipped to the Spanish region of Galicia and the Maderbar Sawmills where, for more than 50 years, the same family have been working with wood. Here, under the watchful eyes of the Midleton Distillery’s Kevin O’Gorman, Master of Maturation; and our Master Cooper, Ger Buckley, the barrels’ staves were created using the time-honoured craft of quarter sawing. Next, the precisely shaped and honed staves made the 10 hour journey from the sawmills to the Antonio Paez Lobato cooperage in Jerez, where they were laid out to dry naturally in the warmth of the Spanish sun. Fifteen months later, the Castle Blunden oak staves were ready to be worked and yielded 29 casks, each of which received a light to medium toast.

Finally, the oak casks for Dair Ghaelach returned to Midleton from Spain, where they were filled with a specially selected range of 12 to 23 year old Single Still Pot whiskeys previously matured in American oak barrels. Nosed and tasted every month, Billy Leighton, Master Blender; and Kevin O’Gorman, Master of Maturation, kept a vigilant watch on the liquid. After 19 months, the Irish oak influence was deemed to have struck a perfect balance with the Single Pot Still character. This exceptional whiskey from Bluebell Forest, finished in home grown Irish oak, is building off the acclaim of our first Midleton Dair Ghaelach release from Grinsell’s Wood. Every bottle can be traced back to one of the six trees felled, each adding slightly different character to the story of Irish oak. 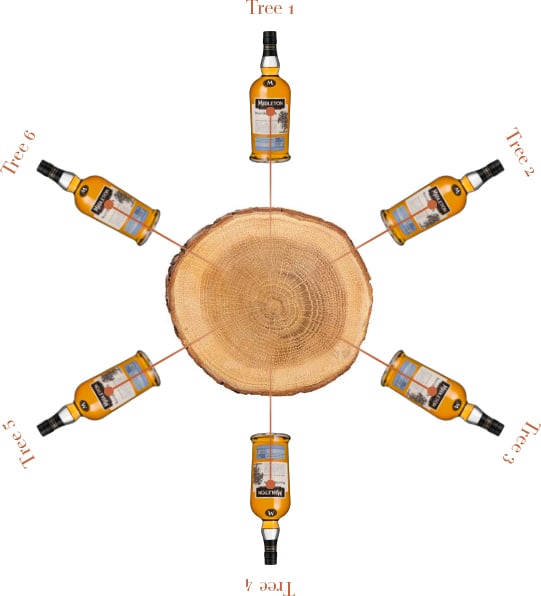 The crisp Pot Still spices are seamlessly enriched by the woodland fragrances of the Irish Oak. Sweet vanilla notes are given depth by some chocolate honeycomb and coffee beans, whilst the balancing rich fruit aromas of red berries, pineapple and ripe banana compliment the subtle aromatic oils.

The typical Pot Still spices are fortified by the Irish Oak character. Robust yet mellow, clove and cinnamon give way to dairy fudge and milk chocolate sweetness combining with a touch of stewed apple.

An exceptionally long finish, with some sweet spices slowly fading, leaving the final bow to the Irish Oak.